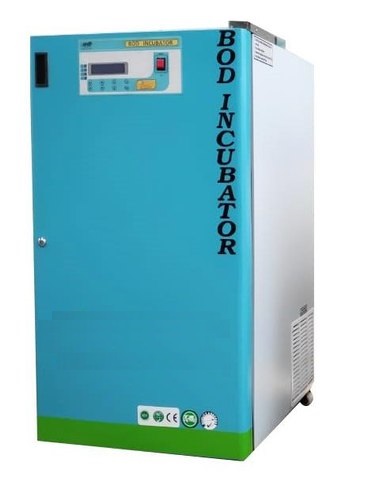 The BOD Incubator is originally designed to incubate long-term tests of BOD (Biochemical Oxygen Demand) or BOD (Bio-Oxygen Demand). Due to its reliability and flexibility today it is used in the most diverse applications: plant growth, germination, incubation of biological cultures, BOD, storage of reagents and etc.

BOD – Biochemical Oxygen Demand – is a standard test and should be performed at a constant temperature, for a fixed incubation period. Initially, a duplicate sample is collected, in one of them the Dissolved Oxygen is measured after collection and in another, the oxygen is measured after some time. This difference in oxygen concentration represents the Biochemical Oxygen Demand. When the water has a lot of organic matter and microorganisms

Biochemical Oxygen Demand and as its name suggests, this equipment is used to control the oxygen consumed by microorganisms while acting on the deterioration of matter. The BOD Incubator is developed for laboratories that need control of the incubation temperature, control of water quality in relation to oxygen, pollution levels and improvement of biology studies on insects, among others. BOD incubator developed for laboratories or demands that require exact temperature control for incubation works, determination of the level of pollution, efficiency of treatment systems, studies of insect biology, among the more varied applications.

WHY CHOOSE BOD INCUBATOR FROM LABOTECK?

Laboteck provide high quality BOD Incubator equipment and products for the analysis of water, soils, effluents, medical, laboratories and biogas. Laboteck provides full support in the after-sales service, with total assistance for the customer to make the most of the kits, product and equipment purchased. Laboteck objective is to develop and commercialize quality analysis technologies for sanitation and aquaculture production laboratories.